A short timeline of sailing on the Alster

Lovingly known as the Alster steamboats among the people of Hamburg, the “white fleet” has featured modern ships for many decades now. They are just as much a part of Hamburg as the Michel and the port. This not only is due to the years-long tradition of sailing on the Alster, but also to its popularity among residents and visitors of Hamburg alike. 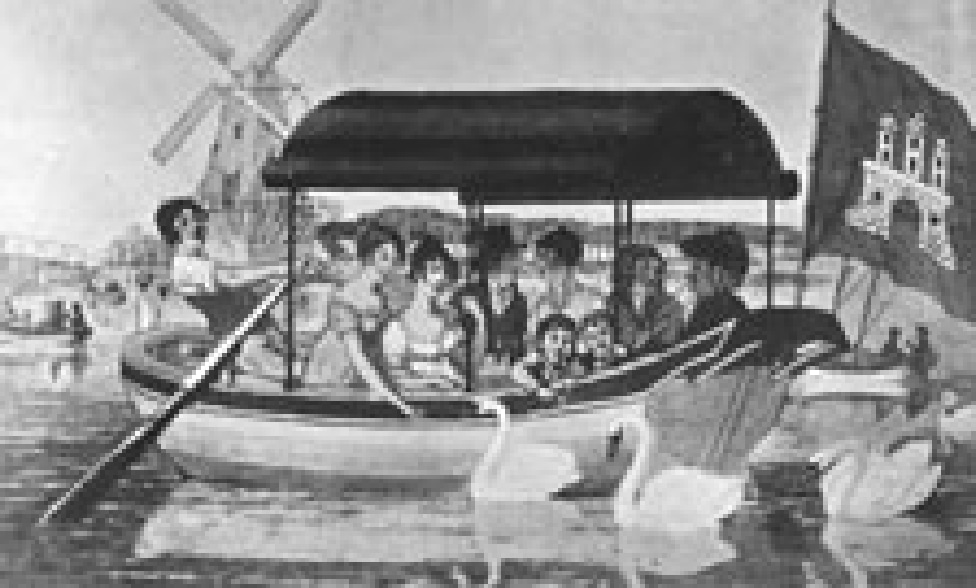 Many decades ago, the barges on the Alster would pick up passengers now and again. From about 1500, quite a large number of people in Hamburg would go on fun trips offering music on the Alster. They took the so-called Alster scuttles, heavy skiffs made of oak and equipped with a table and benches. Sailing on the Alster became more professionally organised in around 1800. As the number of the people living along the Alster increased significantly at the time, the skiffs were not only going on fun trips, they were also offering ferry connections for people going to work. Some 50 years later, the first regular line with steamboats on the Alster went into service – but when the paddle steamer Stadt Mülheim started to leak on its way from the Rhine to the Elbe in 1857, the idea sank in the waters of the Elbe. It wasn’t until 15 June 1859, when the screw steamer Alina from the Hamburg-based ship broker Johann Peter Parrau cast off, that the 160-year history of sailing on the Alster began. The small steamboat started in line service to Mühlenkamp and Eppendorf. The trip cost 3 or 4 shilling so that nearly everyone could afford the luxury of this reliable transport connection.
1500 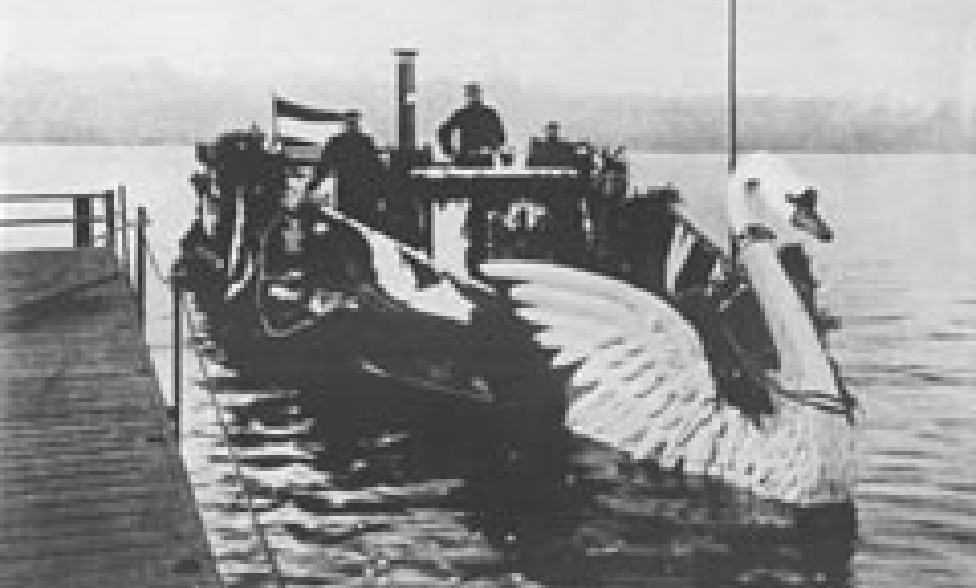 Parrau fused with other providers in 1860 to create a transport company with an organised timetable and a uniform fee system. In addition to residents of Hamburg from all classes and backgrounds, “celebrities” also came on board. A grand boat was even built for Kaiser Wilhelm II which was modelled after Lohengrin’s swan. The Kaiser sailed across the Alster on 29 October 1888 when he came to Hamburg to inaugurate the duty-free harbour against the backdrop of festive celebrations. In the years to follow, the businessman Otto Wichmann became the sole owner of the entire Alster fleet and got caught up in a tough price war with the competition, the horse-drawn tramway. At the height of their popularity, more than 30 steamboats served as public transport on the Alster. Their completely white paint was added in 1902 – the birth of the “white fleet”. The Alster steamboats transported nearly 11 million passengers in 1911 – also through the nights – every 30 minutes. In the years before the First World War, this task was completed more and more by a new type of Alster steamboat, the so-called Glattdecker (flush-deck ship) with an ongoing stern. They sailed across the Alster until 1917, when a lack of coal caused the boilers to go cold.
1860 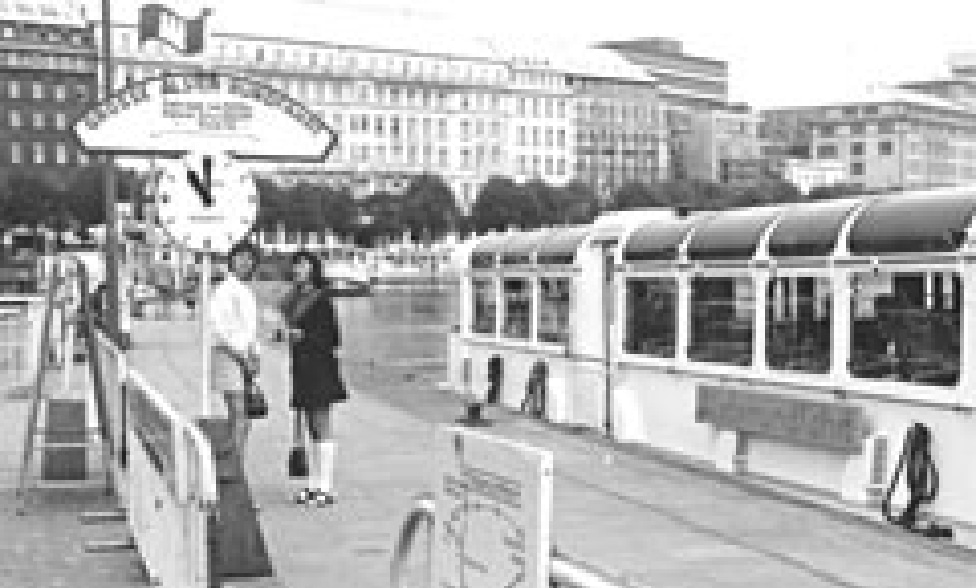 The public transport company takes over

After the war ended, in 1919, the transport on the Alster was turned over to the new owners, the Hamburger Hochbahn AG, who leased out transport during this time of inflation to the towing company Lütgens & Reimers. In 1924, they started a new line service offer. In addition to the old fleet of 14 refurbished ships, barges from the harbour sailed the Alster which could be operated flexibly and at lower cost. In February of 1935, the year in which the Hochbahn regained control of operations, the first of ten new motor ships was christened. When the Second World War began, the transport service on the Alster nearly came to a full halt. The Alster steamboats were “hidden” in a canal or posted as reserve ships on the Elbe. Despite all efforts, some were hit by bombs and destroyed. From the summer of 1946, the first ships took up service again, initially for the relatives of the occupational forces. “The Alster ships are a symbol of freedom,” and with this declaration by the First Mayor Max Brauer, the Alster ships once again started line service for Germans, too, on 25 November 1946. Around 3.4 million passengers used this service in the 1950s. The passenger numbers in those booming years were never again achieved by the Alster steamboats – the underground, trams and buses brought passengers faster to their destinations. In turn, the use of the Alster ships by tourists continually increased.
1919 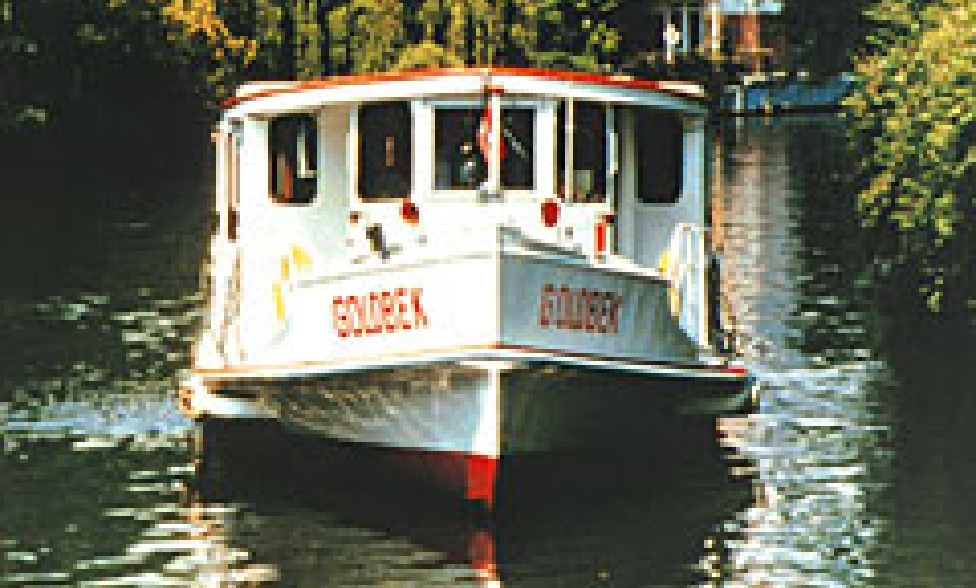 Back in safe waters

When line service recorded an all-time low in passenger numbers in the 1970s, the Hochbahn separated the transport on the Alster from the land transport modes. With the establishment of ATG Alster-Touristik GmH on 27 April 1977, the programme centred nearly completely on voyages interesting for tourists. Canal and channel tours, sunset tours and Vierlande tours, as well as ship chartering, became ever more important. Due to the financial deficit of 1.3 million German marks in the previous year, the Hamburg senate voted on 7 February 1984 to completely halt line service. The change opened up the opportunity for the Volksfürsorge Versicherungsgruppe (today: Generali Versicherungen) to sponsor the new concept. Also, thanks to their contribution, the experience of sailing on the Alster remains a part of the city of Hamburg, its residents and its guests, even today. An important step in preserving the ships was taken in 1987, when ATG Alster-Touristik GmbH bought all the ships and facilities as well as the piers from the parent company Hochbahn. With a more modern fleet, including the exclusive converted saloon ship Goldbek, it set course for a successful future.
27. April 1977 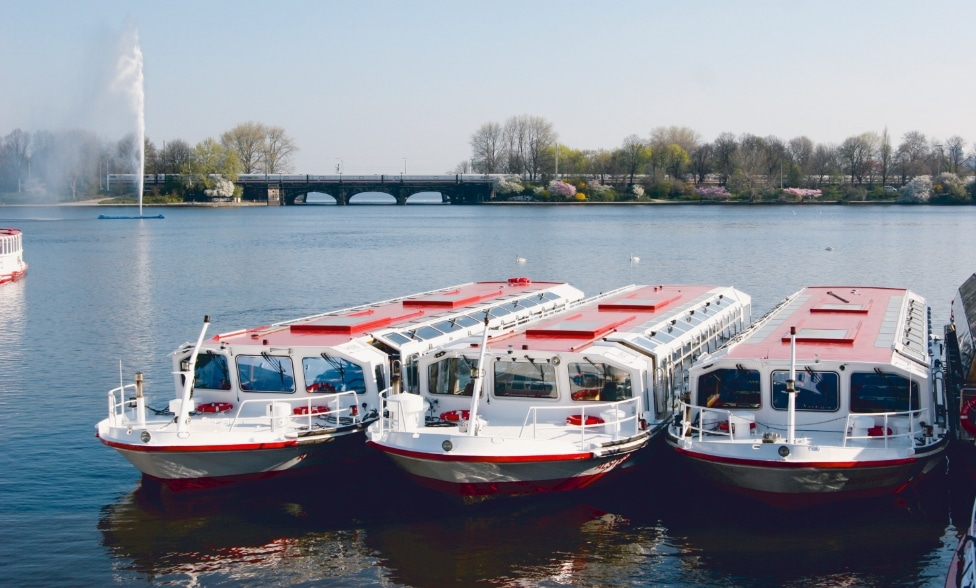 In the 1990s, the flat ships Schleusenwärter, Quarteerslüüd and Alsterschipper took up service, as well as two open-top ships for the first time. In 2000, the world’s largest solar-powered catamaran at the time, the Alstersonne, was launched. With modern and attractive ships, ATG Alster-Touristik GmbH was able to celebrate its 25th anniversary in 2002 in good spirits. This included a large exhibition on the history of Alster cruising, a fireworks show on the Inner Alster and the publication of the book The history of shipping on the Alster. To further reinforce the fleet, ATG added the Fleetenkieker in 2003, another flat ship, and invested in the restoration of the last barge on the Alster, the Aue, in 2004. The floating cultural landmark was built in 1926 and once again sails between the Jungfernstieg pier and the Museum der Arbeit on the historical tour. In autumn 2004, the work on the new design of Jungfernstieg began. With its festive inauguration in May of 2006, ATG moved into its new management office, the “Bastion”, at the Jungfernstieg pier. In the same year, the new flat ship Alsterschwan became part of the fleet and the first Alster steamboat became licensed as a harbour vessel.
1990 - 2017

Setting sail for the future

The pioneering project in terms of ecology came to a successful close in 2008. On 29 August, the fuel cell ship (FCS) Alsterwasser became the world’s first fuel-cell-powered passenger ship for line service to take up service. In the zero-emission ship, nothing smells like diesel, and neither carbon emissions nor particulate matter nor other harmful emissions are released into the air – just harmless steam.

In the year to follow, the big anniversary “150 years of Alster shipping” was celebrated with an exhibition in the Europa-Passage shopping centre and a historical replica of the Alster scuttle Else.